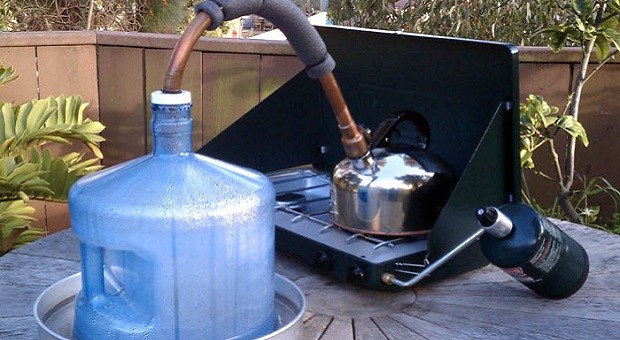 How to turn salt water into drinking water

How are you going to find and maintain your water supply safe and consistent when disaster strikes?

Many people that are not aware of the dangers salt water exposes human body to can think that the Earth's surface is more than half water so there's plenty of it do drink. But out of all this quantity, almost 97% is saltwater and if you ever drink it, chances are dehydration and even death will install rapidly.

Of course, you can manage this crisis with an easy-to-do-at-home method that will save your life in a survival situation. Basically, you will have to remove the salt from the water and you can do that by distillation by evaporation.

One of the simplest methods you can use is by boiling the salt water and capturing the steam, as the salt won't evaporate. Therefore, you'll have drinkable water if using enough heat.

The first method for getting potable water out of salt water gives you the chance of distilling water for more people, even though it requires more energy. You will need a bottle that can resist to high temperatures and something like cork to seal it with, alongside with some tubing and a basin to capture the drinkable water.

Tip: You can use a teapot with the tubing attached to the spout.

This method is the simplest method and involves using a heavy metal cup, a pot with a lid and a lot of heat. Even though it's a simple way of getting potable water, this method is not enough for more than a few people:

Nota Bene: This method can also be tried with a pressure cooker that has the advantage of requiring less heat.

Tip: If you have enough sunlight, you can take advantage of the solar heat for distilling water. It will require more hours to do it, so you should start distilling your water with this method early in the morning. Also, if you don't have a lid, you can use plastic wrap with a small weight in the middle of it, so that a drip point is formed. But it is recommended to use a glass covering as the glass will operate as a prism, decreasing the boiling time.

The third method is a combination of the first two and it is really helpful if you're in a hurry. You'll need a pot, aluminium foil and some tubing.

There is always the option of buying a desalination unit, but with a small amount of ingenuity you can DIY and save some cash.

There's also the option of using the method of reverse osmosis for water distillation, but it requires some special sort of membranes and pressurization.

Another quite new method requires a still developing technology that can separate the salt ions from the saltwater. It is not entirely reliable on, as, at the moment, it can reach about 25% desalinization of the water. This number is far from enough as potable water requires a 99% desalinization.

Desalinating water, anyway, is not sufficient. Together with the methods previously described, you'll need to remove any form of bacteria and viruses to make sure you will not get sick, besides being dehydrated.

Tip: when using any solar method, we recommend filtering the water before desalinating it as it works better without any impurities. Even though water with impurities can also be desalinated, it will cost you more valuable time.

Keeping in mind ALL these steps will protect you from getting killed by dehydration caused by salt, or sickness caused by bacteria.